Last week I made the homemade deodorant from My Healthy Green Family. I made her updated recipe without kaolin clay and I replaced the cocoa butter with shea butter, because that’s what I had. I was a little worried because shea butter is softer at room temperature, but I added a little extra bees wax (heaping tablespoons instead of normal ones) and once it was completely cooled it was hard enough. I used tea tree oil for scent because of its anti-microbial properties, it smells good, and it’s what I had.

It can be helpful to have a partner while making homemade deodorant so that measuring and stirring and not loosing spoons can all happen at the same time. To clean up, I put the pan upside down on a backing sheet covered in tin foil in the oven at 250°F until everything melted off. For everything else, I hand washed with Dawn. I also had to use the Dawn on my hands because our hand soap didn’t get all the oils off.

A single batch was too big for my deodorant container, so I poured the extra into a glass container to melt later on.

Before I discuss the effectiveness of homemade deodorant, I want to mention that I have struggled to find a deodorant that works my whole life (well, since I was 10). I frequently have underarm wetness and before the end of the day, I smell. Badly, in my opinion (although I’ve been told it doesn’t bother other people). No deodorant has prevented the smell, which gets on my shirts and doesn’t wash out. And the worst part is that the combination of deodorant and sweat will stain shirts permanently. Just a few wears when it’s hot or I’m moving around a lot can ruin a shirt. So I basically decided that if homemade deodorant worked for me, it would be a miracle. 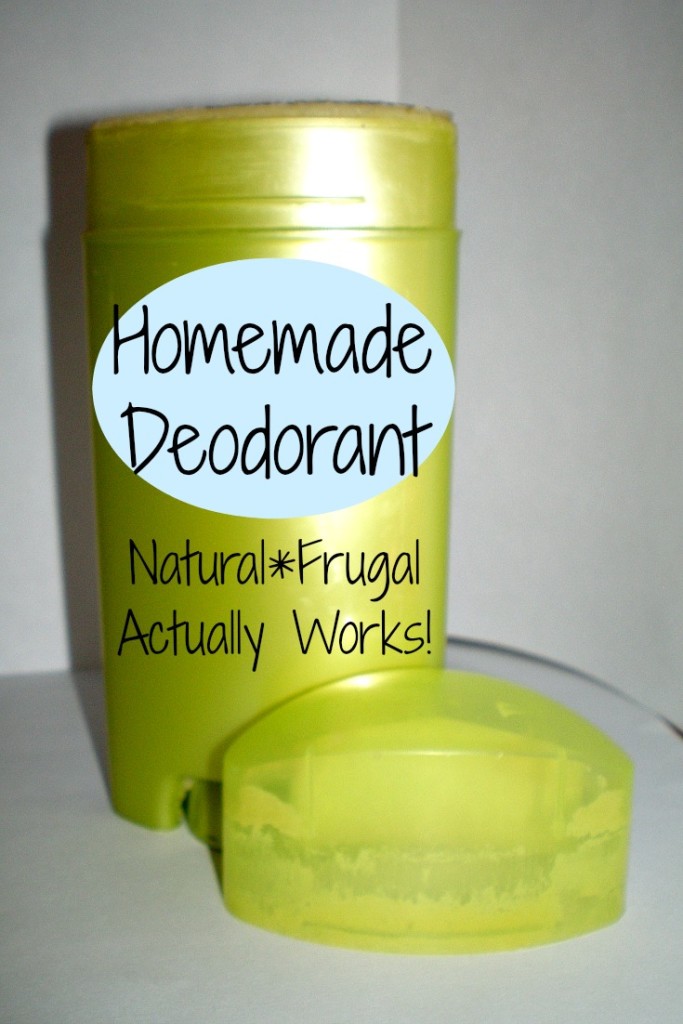 I used it for a week before beginning to evaluate my new homemade deodorant in order to allowed my armpits to detox and get rid of any I had residue from my old, store bought deodorant. I was then able to test on hot summer days, during karate, and the ultimate test: a day at the state fair.

Upon initial application, the deodorant felt good. Just the right amount was applied. My armpits felt a bit greasy when I touched them (keep in mind I used shea butter), but it soaked in within a few hours. I applied it at night, so this was not a problem. And even the next night after a long day, I smelled fine. I noticed a small bit a wetness while wearing a tight t-shirt, but not enough to be a bother. When I went to karate after applying the deodorant 9 hours earlier, there was almost no smell at all afterwards. Now that’s impressive!

On Friday, I applied the deodorant in the morning and put on a shirt that was tight in the armpits. I again noticed some wetness, which bothered me, but it was no more than normal. And with this wetness, there was no smell. This homemade deodorant is great at its job! It did leave a residue on the shirt, but this washed out in the laundry. Most importantly, not only did the residue wash out, but to date my homemade deodorant has left no permanent staining!

During an entire day at the State Fair, there was wetness, which was unfortunate, but not a big deal. After all, it was hot and I was sweating. There was a slight smell, but not really. Certainly not compared to if I had store bought deodorant on.

In the end, this is the best deodorant I have ever used, and I’ve tried a lot. It is cheap and made from natural, healthy products that are safe for your body and the environment. Most importantly, it works at eliminating body odor, even after a day at the State Fair. It is definitely worth making.

Update 12/28/12:
I’ve been using homemade deodorant for over 4 months. I have almost used a whole batch at this point, applying it every day. And I still love this deodorant so much that today I made a second batch! It is by far still the best I have ever used at preventing body odor and protecting my shirts. It isn’t an antiperspirant, but the sweat isn’t smelly and disastrous to my shirts, so it’s okay.