My mom came home from work with a bag of wool sheared off a meat sheep. It was disgusting, I was not planning on learning to spin yarn for about 15 years, and I had no idea where to start. I was a 20-year-old college student in the suburbs. That should sum it up for you. The hardest part was figuring out what to do. There is a lot of conflicting info out there and I didn’t know if things would be different for wool from a sheep that was not bred for making yarn. So here’s what I ended up doing and how it turned out.

First Step: Prepping my work area
One of our dogs was allergic to wool and this fleece had poop on it. So the question was, how to I get this fleece clean without killing the dog or touching poop and dying of E. coli (I’m very dramatic when it comes to gross stuff)? First, I found an old bed sheet and laid it on the deck, making sure all the animals were locked inside. That second part is important. The wool was double bagged, and the dog was still able to smell it and trying to get to it, regardless of the fact that it would kill him if he succeeded. Turns out, animals LOVE fleece, and you don’t want them ruining your work. Then I got out nitrile gloves (latex would probably be fine, but this is what we had) for skirting the fleece and good rubber cleaning gloves for washing. The reason for two sets is dexterity is needed for picking nasty bits out, while thick gloves to protect you from hot water are needed for washing. 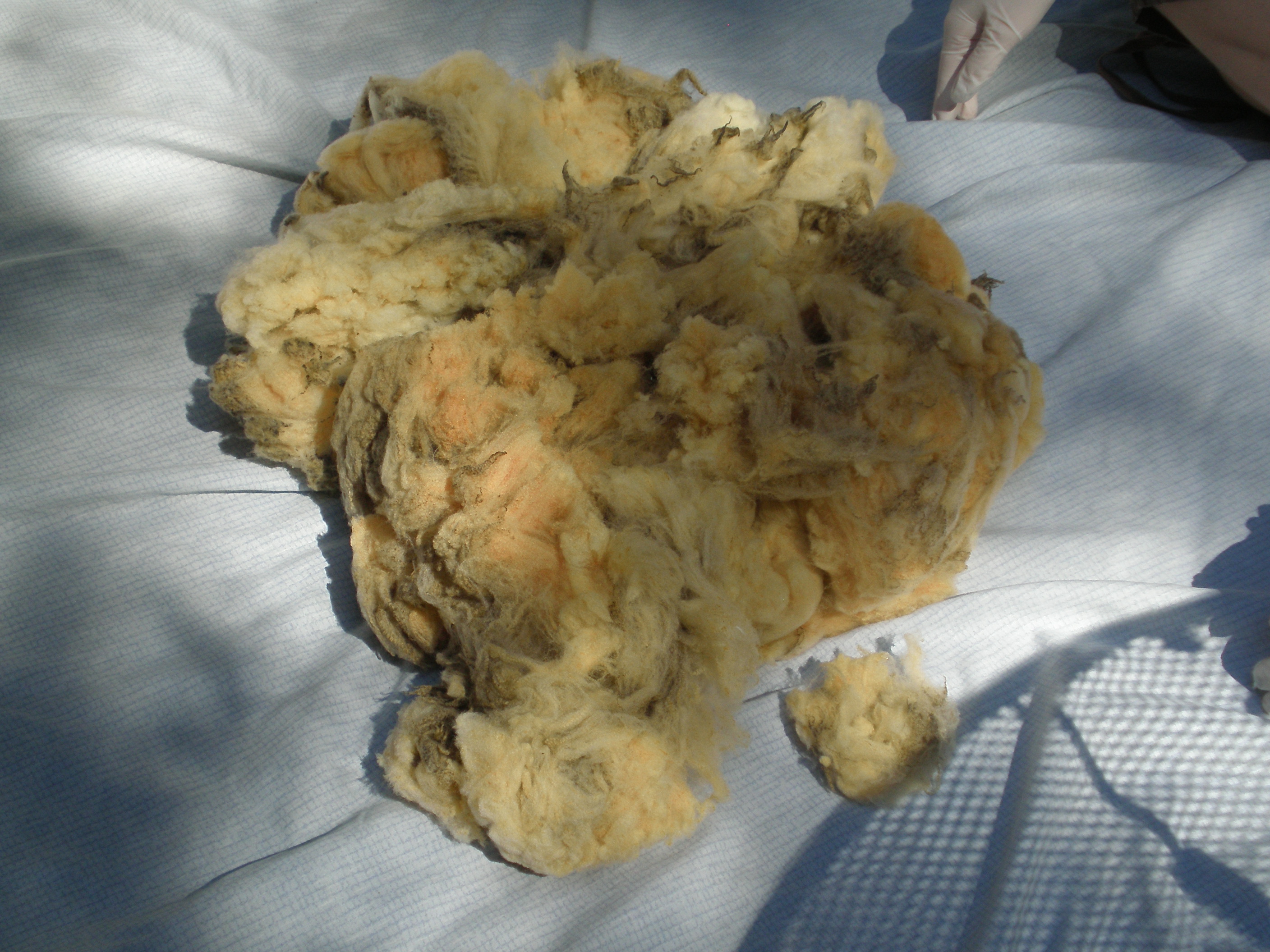 May as well have had the sheep standing there

Second Step: Skirting the fleece
The feeling of lanolin on gloves is an interesting one. The process of skirting fleece was not what I had expected based on what I had read. If the fleece is in one piece, you can see what you’ll want to remove because it will be all around the edges. My fleece came from teaching students how to shear a meat sheep, so I had no idea what to take off. At least it was only in two pieces. As far as I could tell, the tips of every single string of fleece was gross. So I just picked out little balls and the extra nasty poopy bits. Until I washed it and found out first hand if I didn’t do enough, there was nothing more I could do. Sorry for the shadows in the picture. 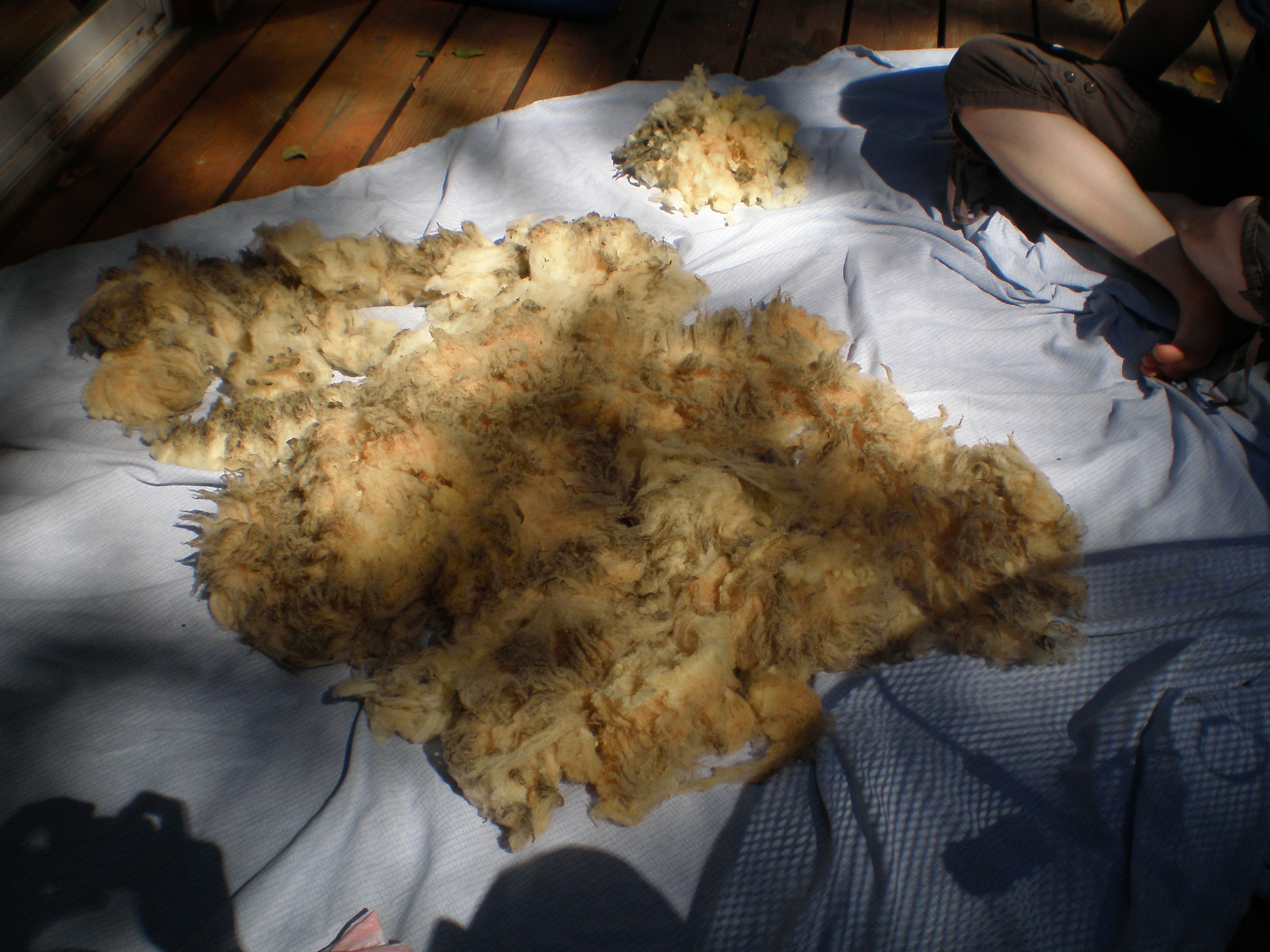 Third Step: Pre-soaking the fleece
While this step is not necessary, I highly recommend it. I filled our laundry room sink with cool/lukewarm water and dunked the fleece in. Immediately red…stuff (probably dirt) started coming out of the fleece. Less than four hours later when I checked on it, the water was brown. It was disgusting. But that means that when I start washing, my fleece will be that much cleaner, so I will need that much less hot water (using less energy) to wash it. I let it soak all day. I would have soaked it all night, too, but someone needed to do laundry and our washing machine drains into that sink. Even so, the water was super brown and the fleece was much whiter. Even the black tips were now gray. 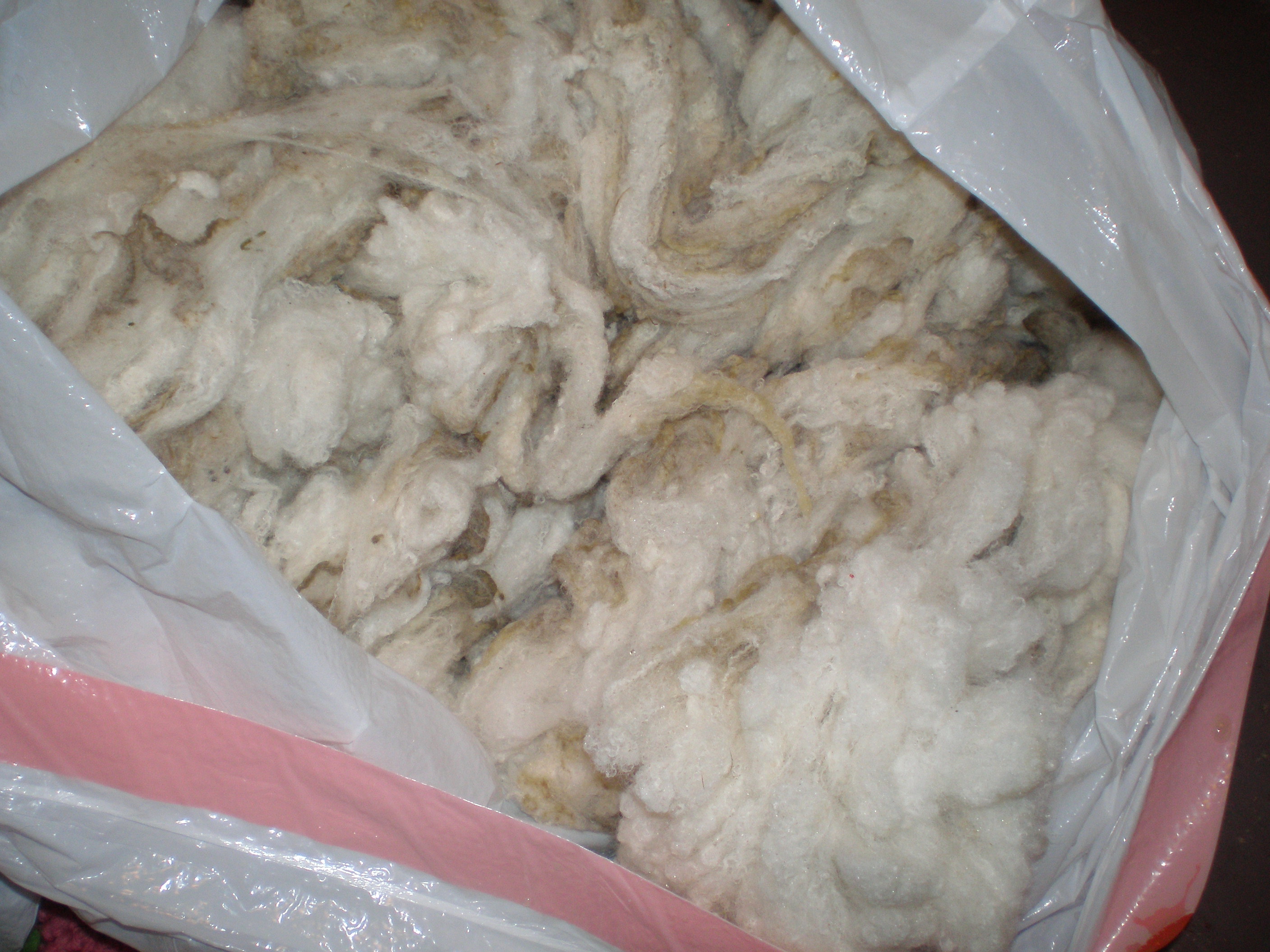 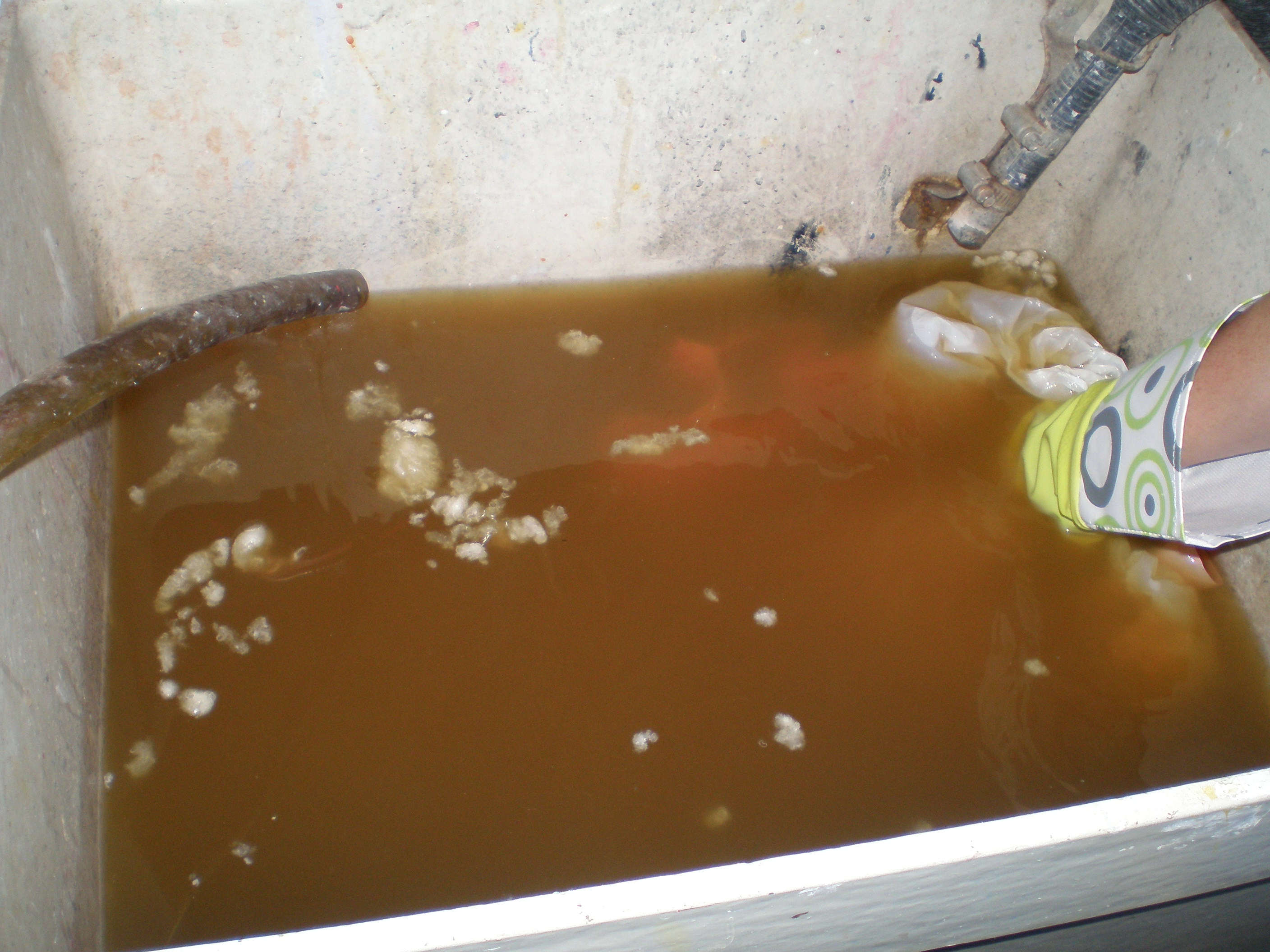 Fourth Step: Washing the fleece
For my first wash, I decided to do a hot wash. This is what is most commonly recommended, since it removes the lanolin. With a low-lanolin fleece like I had, I could have done a cold wash, but that was for another day. I washed the fleece in my kitchen. We have a double basin sink, which really helped. I heated two large pots of water to about 150 degrees before pouring them into my larger basin. Then I added original blue Dawn, to the point that the water was a bit blue. Do this after adding water; you don’t want suds. Then I added one of my two chunks of fleece (the second wouldn’t fit). I let it soak for 15 minutes, prodding it down every once in awhile. Be careful! Even with rubber gloves, the water is very hot! After 5-10 minutes, I began heating another batch of water. 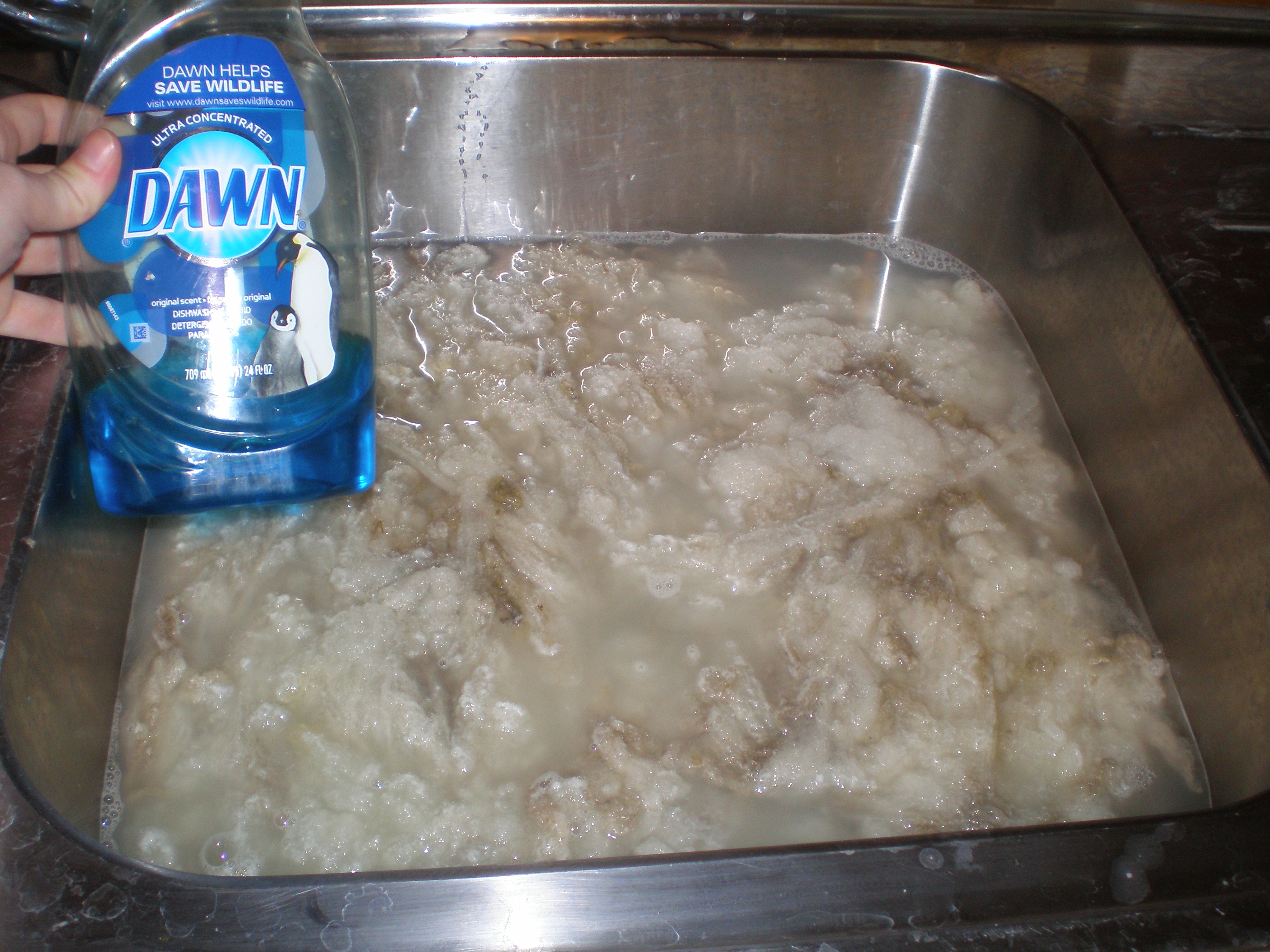 Fifth Step: Rinsing the fleece
After I was done with the soapy soak, I moved the fleece into the second basin in my sink (see how that’s helpful!). I switched the plug for a strainer and drained the dirty water. This is important because even though I couldn’t see them, there were still some small clumps that the strainer caught. While it was draining, I squeezed the dirty water out of the fleece. Then I rinsed the large basin real quick and poured in the freshly heated water. In goes the fleece and I let it soak for another 15 minutes. Repeat this until the water is clean after the soak. On my 3rd rinse, I had to run an errand and left it to sit and cool. I was pretty sure I read that was okay, since it’s cooling very slowly (quick temp changes result in felting) and I was almost done rinsing (if there is still a lot of lanolin, you don’t want to let it cool). A helpful trick I’ve learned is that at this point, if your water is clear but there is still stubborn dirt on your fleece, it’s okay to gently work it out under the water, working towards the ends. I was amazed by how well this worked and it didn’t felt the fleece like I feared! Otherwise, it will also clean up as you comb/card it, but not as well. So after that rinse, I switched it into a lukewarm rinse with a bit of white vinegar to balance the pH. It’s pretty obvious when you’re done rinsing. You wouldn’t drink the water, but it’s a lot clearer than anything you’ve see so far. 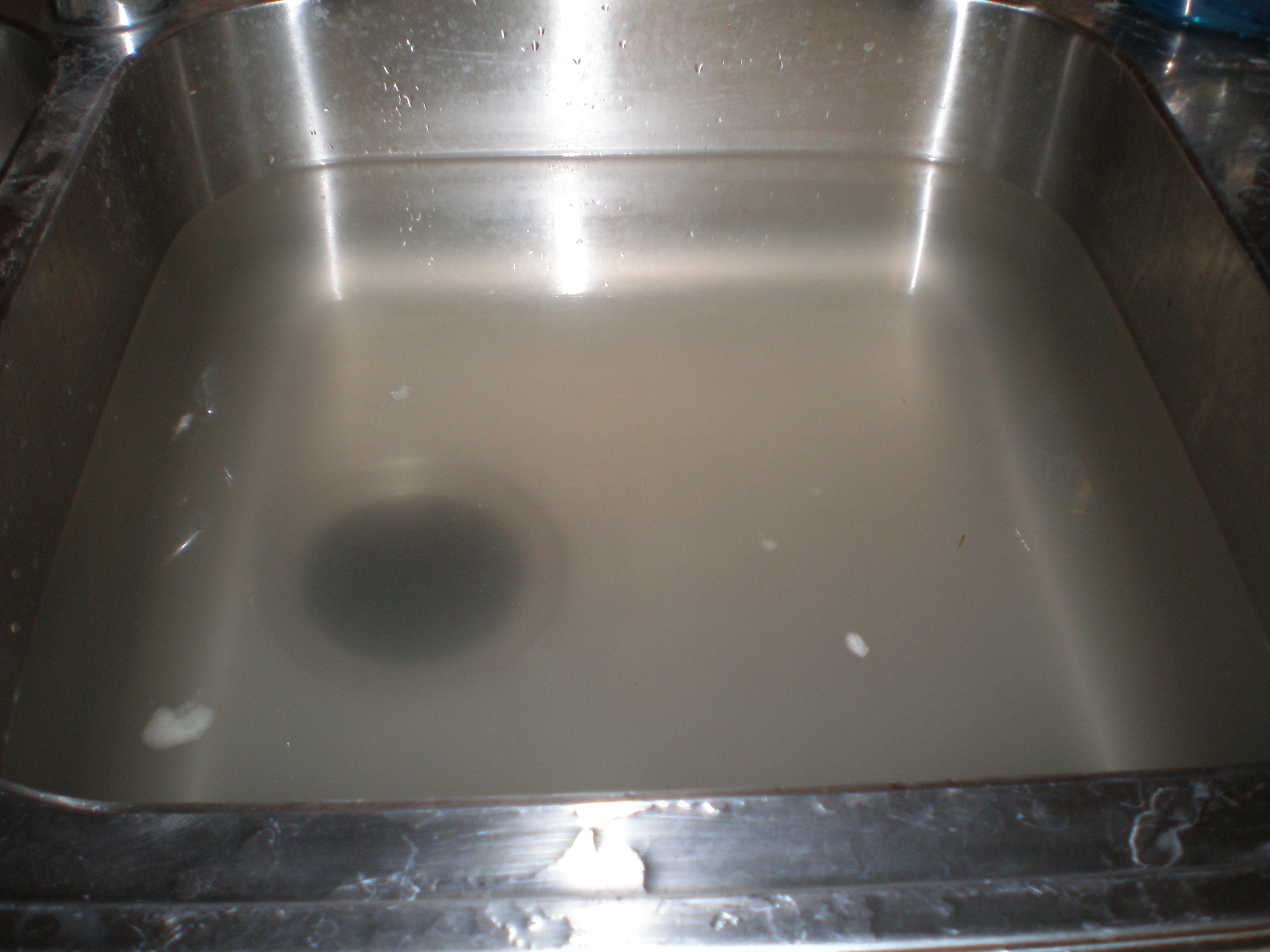 Final Step: Drying the fleece
Finally! You’re done washing your fleece! Here comes the easy part. First, ring your fleece out in the sink to get rid of most of the water. There’s still a fair bit of water, however, so from here you have two options. You can get some of that water out by putting it in your washing machine on the spin cycle ONLY (can’t have any water being added) or you can get it out with a towel. I chose the towel method because I didn’t want to carry the fleece downstairs and using that much force scared me. So I just rolled it up in a towel and squeezed out the moisture best I could. Now you have to find somewhere to put it. I took the sheet from earlier and laid it out on the table on our deck, cleaner side up, but you can do this wherever and however works in your house. Then I spread the fleece out as thin as I could before suspending a mesh above it using chairs to keep critters out. Now you wait until it’s dry! In the meantime, you get to clean up your work area. After it’s dry, store it however you want, as long as moisture isn’t condensing into and and critters aren’t eating it. I put mine in a pillow case for a few days to really make sure it was dry, then put the pillow case into a plastic bag due to our allergic dog.

How did it turn out? The only way to find out (especially if you don’t know what you’re looking for) is to spin it! If you have any questions throughout this process (believe me I did), there are plenty of people out there willing to help. 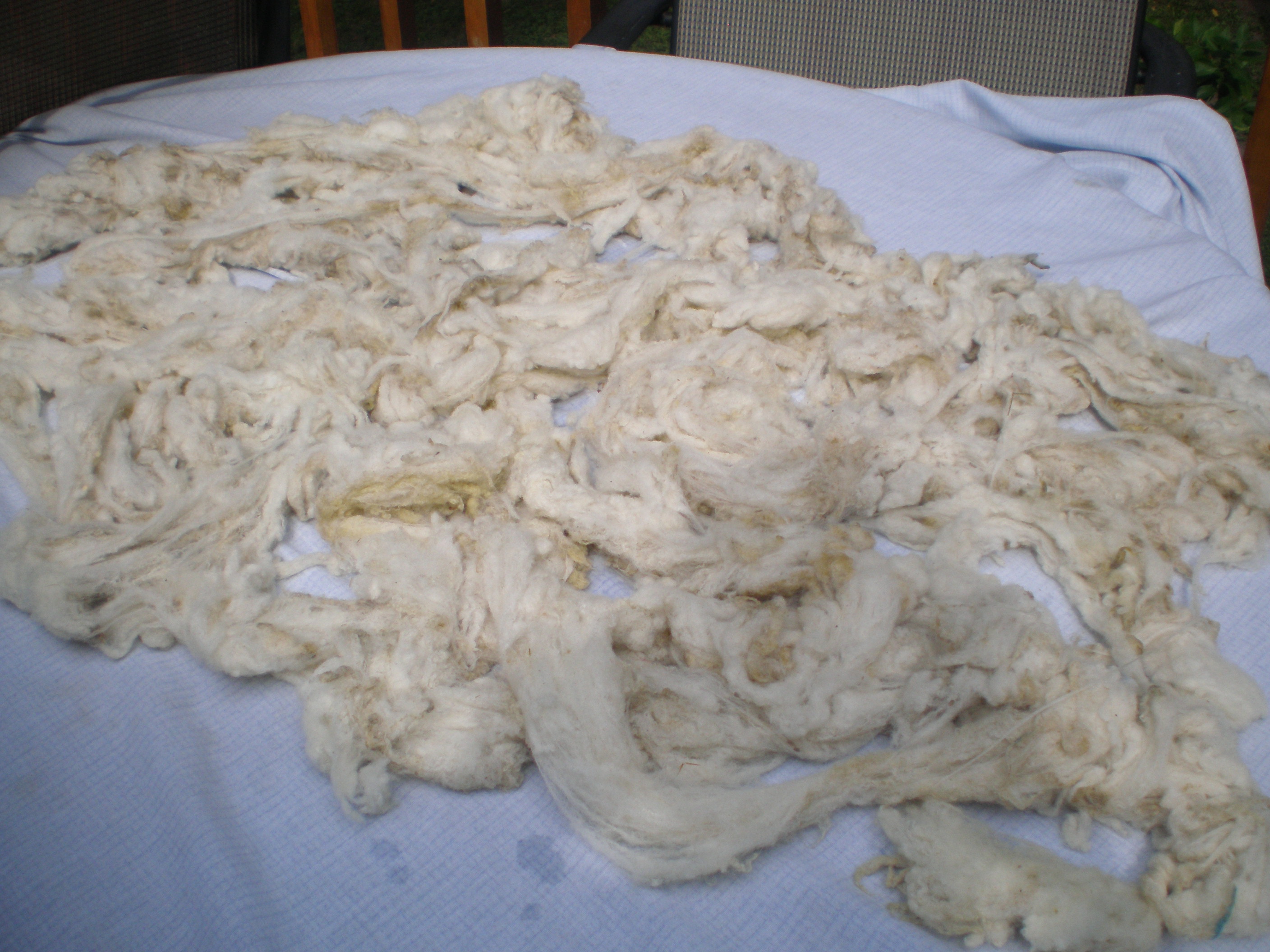 Just relaxing in the sun