Over the past several months, I have become more and more aware of how my whole life has been leading up to my health problems. In many ways I was very blessed to have parents who valued real food and natural things – I was cloth diapered and my mom would have had a home birth and breast fed me forever if she had been able to. I’m sure that this helped keep my health problems on the subclinical side. However, there are still many bits and pieces of my upbringing that likely had a direct impact on my leaky gut and overall health. Although I was generally healthy as a child, I look back and see a variety of things that built up over time until it was all too much for my body. I don’t know what tipped the scales, but once they did, my health began to decline continuously. Until I began to heal it.

My list of conditions (some of these are simply symptoms, not diagnosis). A strike through is a condition that I have completely healed: , subclinical hypothyroidism, infertility, irregular periods, anovulation, dysthymia, anxiety, poor sleep, acne, keratosis pilaris

September 1991 – Born via c-section after a complicated pregnancy. Doctor’s were 100% confident I would be mentally handicapped. I was thoroughly tested in preschool and found to be fine. Breast fed for only 3 months due to lack of supply.

Early childhood – Received all of my vaccines on schedule. My parents were part of a CSA. I pretty much ate a Standard American Diet growing up, but a more healthy version than many. We only had organic mac and cheese, we never had pop or hotdogs in the house, candy was a rare treat, etc the entire time I was growing up.

Elementary school – I had strep throat about once a year for most of elementary school. Treated with a course of penicillin every time. I had two cavities in my baby teeth, so those fillings fell out eventually and I never had any in my adult teeth. Two teeth pulled due to crowding.

Teenage years – I got my first period at 12, and they were always okay. They never perfectly regulated, but I usually knew about the week it would show up. The first few days were painful, but not excruciating; I never took pain meds. Two more teeth pulled because at 13 I hadn’t lost all my baby teeth and they wanted to put braces on me. I had braces 2005-2007, which helped a lot but did not fix everything.

Fall 2008 – I always had acne and attempted to treat it topically. At one point, I went to the dermatologist and she gave me a prescription for an antibiotic. She did not tell me how important it would be to get probiotics and to take the antibiotic every day to prevent resistance. Thankfully my mom made me eat yogurt every day (I hated yogurt at this point, so it was the sugary strawberry stuff, but it still had the cultures), but I skipped doses of the antibiotic occasionally. After a couple months I decided it wasn’t working well enough and I stopped taking it.

December 2009 – My period was a week late, and I almost passed out from the pain. My next period was early and came with no pain.

March 2010 – Another late period accompanied by intense pain. As I lay in bed, my mom insisted that I go to the gynecologist. At 18, they put me on the birth control pill without even waiting to get my test results or trying to figure out what was wrong. Read my full story of being on the pill here. 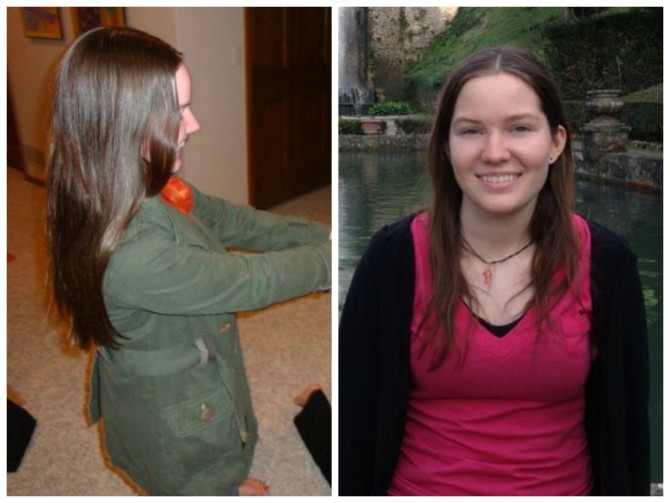 The left picture was taken in March 2009. The right in January 2014. Notice how thin and ragged my hair had become.

September 2010 – I entered college. My first week of Sophomore, Junior, and Senior year all brought digestive distress despite always having an “iron stomach” growing up. Freshman, Sophomore, and Junior year I developed extremely itchy skin on my legs in the fall that cleared up after two weeks.

2012-2013 – My libido dried up to nothing, I became less and less motivated to do my school work, my anxiety and depression worsened, and I became fed up with the birth control pill.

July 2012 – I made the transition from store bought personal care products to homemade.

January 2013 – I developed a horrible case of eczema, and nothing I did would clear it up. I also began to run regularly, and LOVED it.

June 2013 – I went on my first elimination diet to heal my eczema. I was vegan for 3 weeks while doing this. I lost a ton of weight and my skin completely cleared up – both eczema and acne. I also believe this cleared out all of the estrogen leftover from the pill. Despite finding relief from all signs inflammation, I still had a lot of fatigue. I discovered a nightshade sensitivity and have not had an instance of eczema since cutting them out.

August-September 2013 – I went back to a mostly SAD diet. I gained back all the weight I had lost and more – almost all on my stomach.

October 2013 – After 6 months off the pill, I finally got my period back. It would continue to be extremely irregular for the next two years.

November 2013 – I began using essential oils, which helped me manage the acne and toxic moods that I was dealing with.

Senior year of college – My moods and anxiety began to worsen. I tried to clean up my diet on many occasions, but often failed. In second semester I began to run regularly again, which made me feel great. I started to see a counselor, who told me I likely had dysthymia.

May-July 2014 – I graduated from college, got married, and went backpacking through Germany for 3 weeks. Although living on bread on ice cream (and pasta, sausage, and cheese) for those three weeks probably wasn’t the best for me, I was in the best shape of my life when I got home. 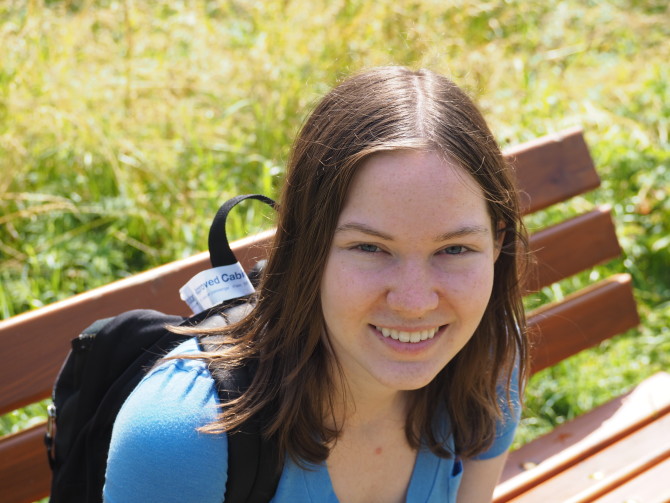 My first full day in Germany. We were on the 2 mile uphill walk from our hotel to the town. I had just cut 6 inches off my hair so it looks much healthier!

August 2014 – I went AIP, added fertility supporting activities, and tried to maintain my strength. My skin cleared, but I remained incredibly fatigued. I discovered a sensitivity to sugar. I quit AIP by going to the State Fair. I got my hormones tested, and found that all my sex hormones were low, my thyroid was low, and my adrenals were fine.

Fall 2014 – I began a gut and thyroid healing program with Dr. Megan Birt. However, I could not stick to the diet portion. I just really struggled with it. I became incredibly depressed and suffered from crippling fatigue. Some days, I never got off the couch and I stopped working. Mostly I binge watched Netflix.

December 2014 – I began detoxing metals, and my protocol started working enough that I was starting to work again.

January 2015 – My hair stopped falling out and I began GAPS Intro. I soon began to see increased energy like I had never seen before and my moods stabilized. I was happy.

March 2015 – During GAPS, I discovered a sensitivity to dairy and a really bad emotional reaction to nuts. I ended up making myself very sick through binge eating nuts.

April 2015 – I restarted GAPS Intro. While I discovered a sensitivity to pork, I found even deeper healing this time around. I moved in with my in-laws and developed a lot of stress over the next two months, but I definitely noticed that I was feeling much better.

Today – My libido is still low, my cycles are still irregular, and I am still working on my digestion and emotions. But I am so obviously healing, and I look forward to continuing to see improvements. I am writing a book called Healing Patiently about my experience, to be released at the end of June, in an effort to help others find healing as I have. 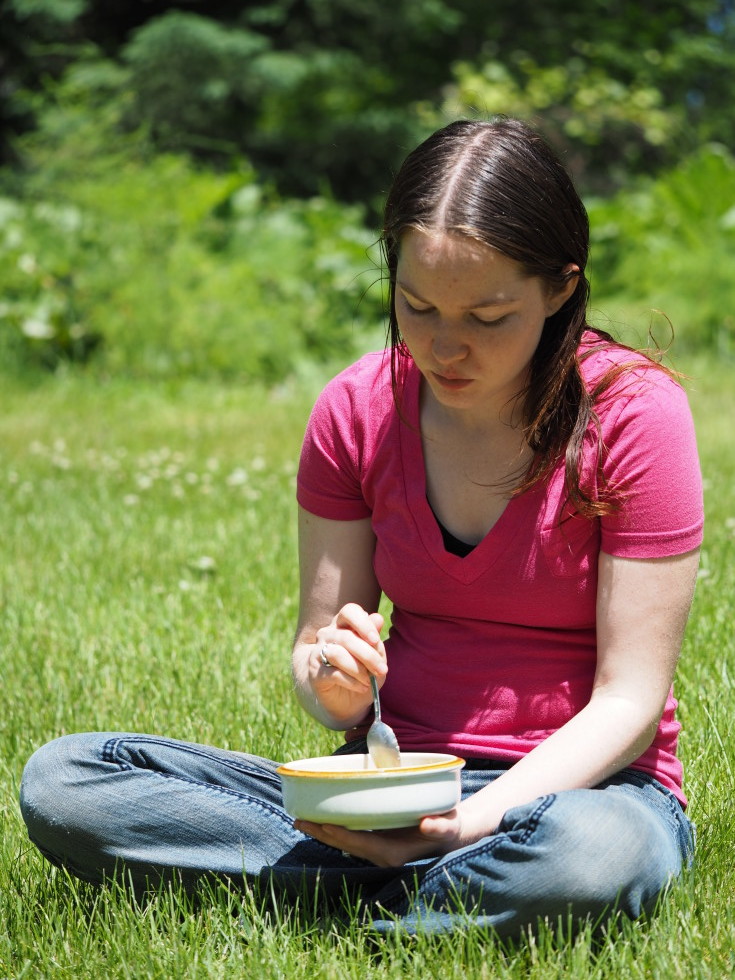 Eating soup in the sun, getting some grounding in. Apparently my pink shirt makes me more photogenic.